* Posts under ‘Whitney’s Notes’ are for me to organize my notes from conference, my research over special topics and my random work inspired by random things. Please check reference list to find the original content.*

When I was picking my PechaKucha at the beginning of this semester I did not know most of the topics and I panicked. Fortunately Gerrit Rietveld caught my eyes because I remembered seeing his name and his famous “Red-Blue” chair and Zig-zag chair last semester when we did the 1:5 scale chair model projects. I know at least 6 students among us did one of his chair models.

2. Who is Gerrit Rietveld

You can say he is one of “the dead chair guys” as Matt Sander refers, but the world remembers him as the Dutch designer, architect and painter. Born and raised in Utrecht, he also spent his entire life in Utrecht (what? and why? How much can we blame transportation in Netherlands from1888 -1964?). 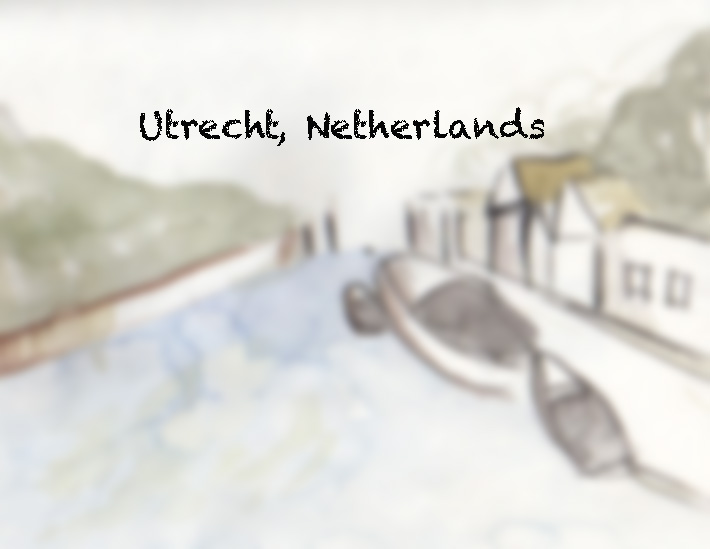 The city of Utrecht grew rapidly during the second half of the nineteenth century. Although it had a fairly insular and hierarchic social structure, artists and art lovers treated each other as equals. It was a great environment for designers like Rietveld. This still is a remarkable feature of social relations in Utrecht until today. 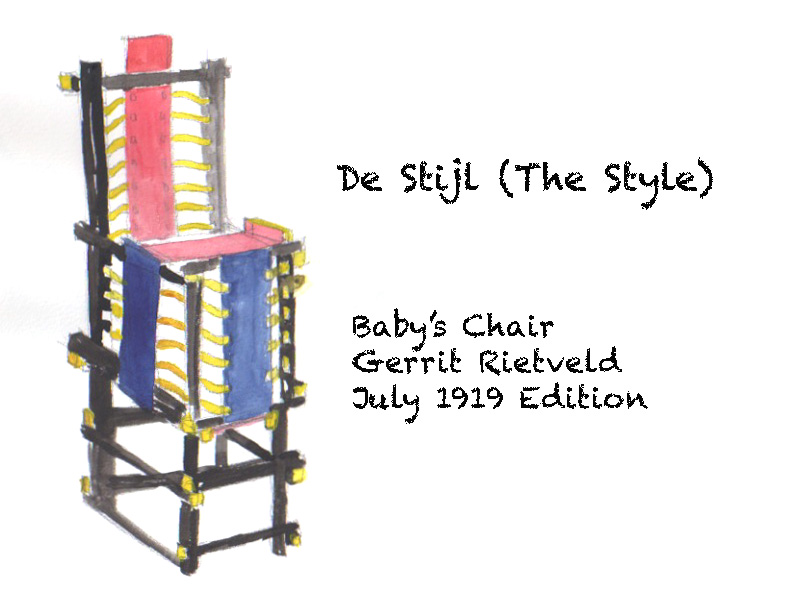 A shy dreamer like Rietvled couldn’t ask for a more perfect debut than getting published in De Stijl. Even to a neutral country like Netherlands, WWI had impact on many respects of life there. De Stijl  (Dutch for ‘the style’ ) was a journal that presented work by many artists, some of whom were more or less forced to spend the war period in Netherlands. In July 1919 edition Rietveld’s baby’s chair was published, which gave his career and life in general a considerable boost. He later became one of the principal members of the Dutch artistic movement of De Stijl. 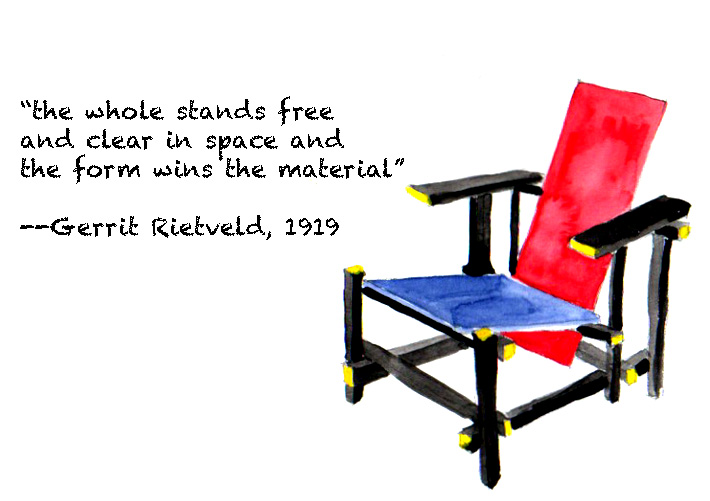 “the whole stands free and clear in space and the form wins form the material” Gerrit Rietveld, 1919.

Rietveld kept simplifying and modifying his 1918 slat armchair and around 1923 the Red-Blue Chair was produced. By applying color to the crosscut ends of the slats he gave these components their own starting and end points along a line that in principle extends into infinity, an endless space that can be perceived thanks to this articulation. Therefore he had achieved the objective he had stated as his ambition in 1919.

6.  From cabinetmaker to architect 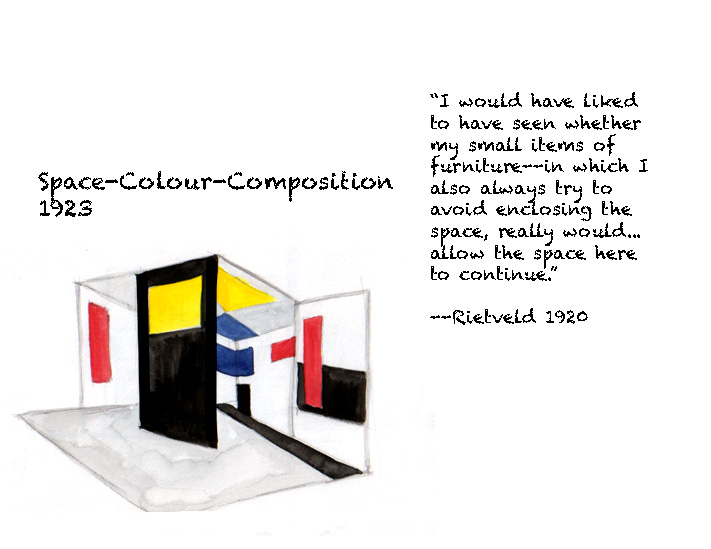 “I would have liked to have seen whether my small items of furniture—in which I also always try to avoid enclosing the space, really would…allow the space here to continue.” –Rietveld 1920

It is hard to define a moment when Rietveld went beyond furniture design into the space around it. Maybe there isn’t one because he always put forms in space. In 1923 he designed the “Space-Colour-Composition” with another member of De Stijl, and after that he was able to receive some major commission work for interior architecture design.

I usually skipped the love affairs when introducing famous people but the house he remodeled with Truus Schröder, the Schröder house, was not only “a small miracle” for their enduring collaboration and love, but also one of the best known examples of De Stijl-architecture and arguably the only true De Stijl building. Mrs. Schröder lived in the house until her death in 1985. The house was restored by Bertus Mulder and now is a museum open for visits. It is a listed monument since 1976 and UNESCO World Heritage Site since 2000.

During the nineteenth century’s Arts and Crafts movement led by William Morris, Rietveld still firmly believed in the benefits of the industrial revolution. He experimented with materials and methods of fabrication and began by making variants of model.  In 1930 he designed a series of modular furniture for the Metz & Co. department store based on the standardized elements. 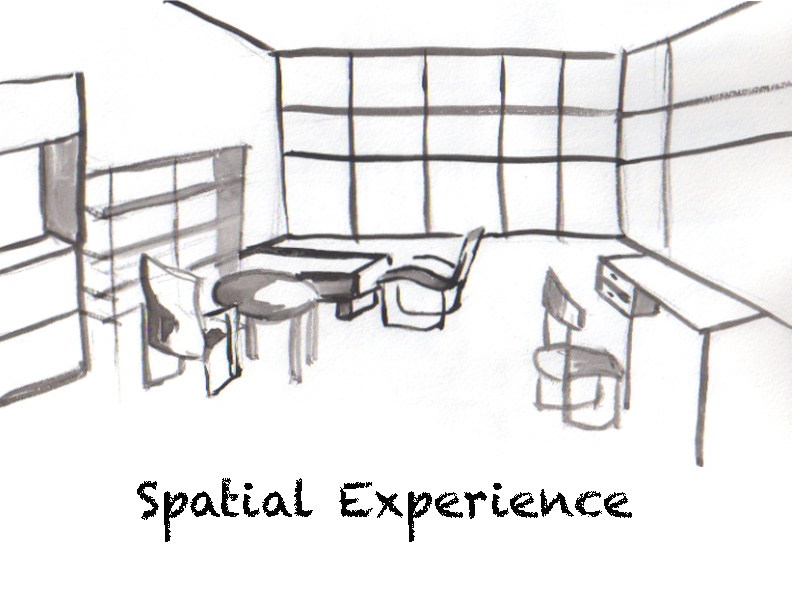 That being said, he didn’t draw the conclusion that he should extensively and systematically immerse himself in industrial production for architecture and design. For him, the spatial experience was still and always had been the most important thing. 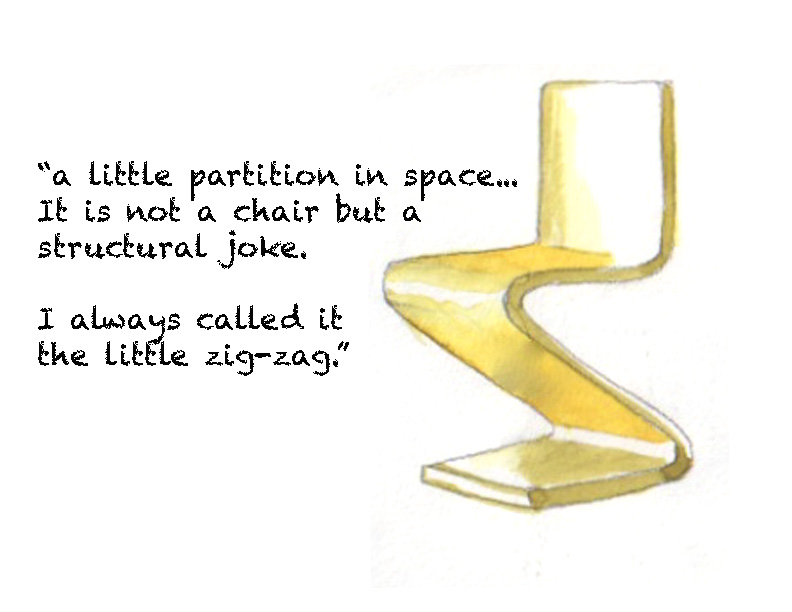 “a little partition in space…It is not a chair but a structural joke. I always called it the little zig-zag.”

During his cooperation with the Metz & Co. department store, the Zig-zag chair was born. It is a single line in space and therefore the ultimate symbol of Rietveld’s work for many people. He characterized the form as “a little partition in space.” 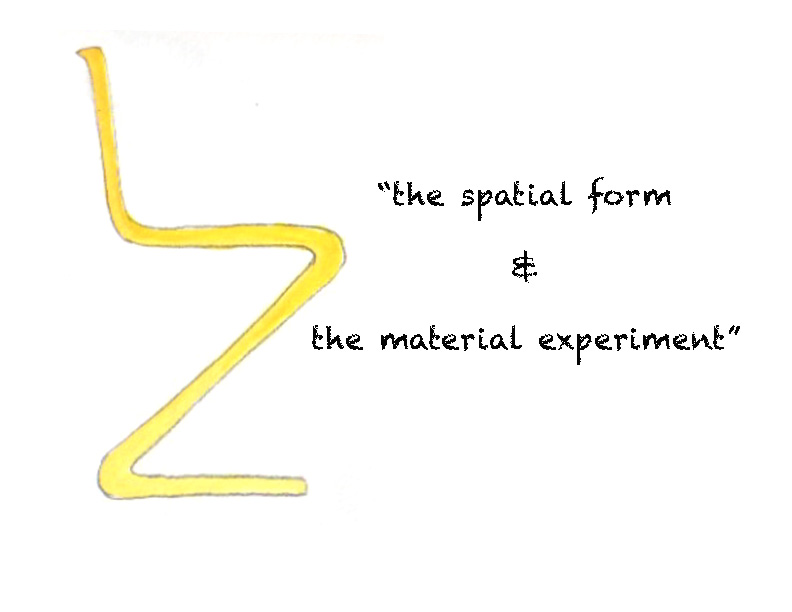 The design is the result of Rietvelt’s experiments with the one-piece fiberboard chair as well as being a form that fulfills his spatial objectives perfectly. He introduced two essential elements: the spatial form and the material experiment.

The Zig-Zag chair was so successful that he placed them around the dining table in almost all his models and drawings. There were also many variants of the Zig-Zag Chair possibly requested by the Metz & Co. 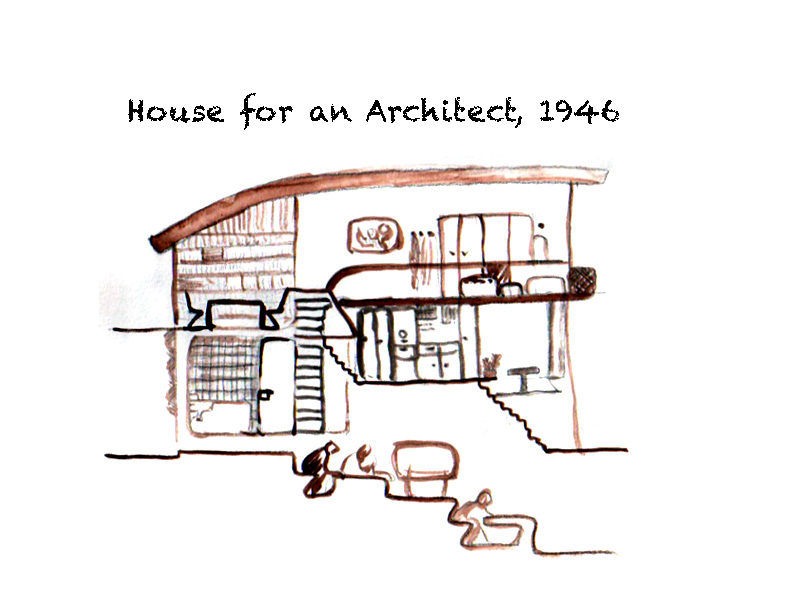 Rietveld was 51 years old wen WWII broke out, too old to be sent to work in Germany. He couldn’t obtain enough architecture commissions. Perhaps to pass the time, in 1946 Rietveld sketched an ideal house for himself and called it the “House for an Architect”. It is a paradisiacal house where living and working as well as nature and culture are combined harmoniously.

Finally around 1951 the De Stijl exhibition staged in Amsterdam made Rietveld the focus of international attention. For the first time his contribution to the development of 20thth century architecture and design was undisputed and greatly acknowledged. He became the “grand old man” of the pre-war Dutch avant-garde.

This late recognition for Rietveld was based almost entirely on the Red-Blue Chair and the Schroder House, which were seen as “manifestos” of De Stijl’s principles. Along with the Post-war popularity of Modernism, the revival of De Stijl, or Neo De Stijl, have great influence on his late work. 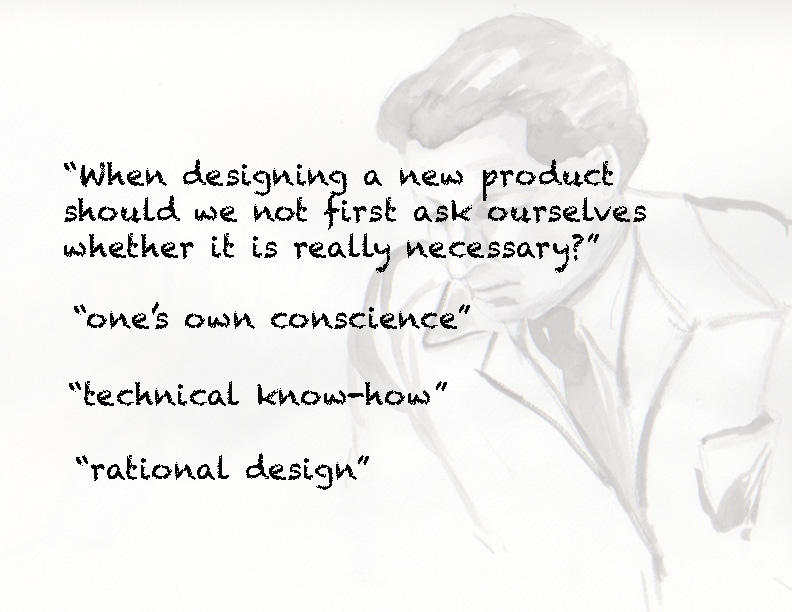 “When designing a new product should we not first ask ourselves whether it is really necessary?” 1953

Rietveld taught at various academies and the new discipline of industrial design became a preoccupation for him. In his view until objective criteria had been defined then listening to one’s own conscience was the only means of deciding this. In addition a designer needs technical know-how.

“Rational design” is the term Rietveld used for industrial design. Art sharpens and broadens our perceptions, elevates our awareness of reality. I thought I was the only one that think his articulation of his views was quite general in nature, but the author of the book Gerrit Rietveld also found it is hardly a narrative on which one could base a curriculum or a building.

The last fantastic commission for Rietveld is designing the Van Gogh Museum in Amsterdam. He had already gained some experience with exhibition spaces and with his fame it seems like he was the perfect person for this job. 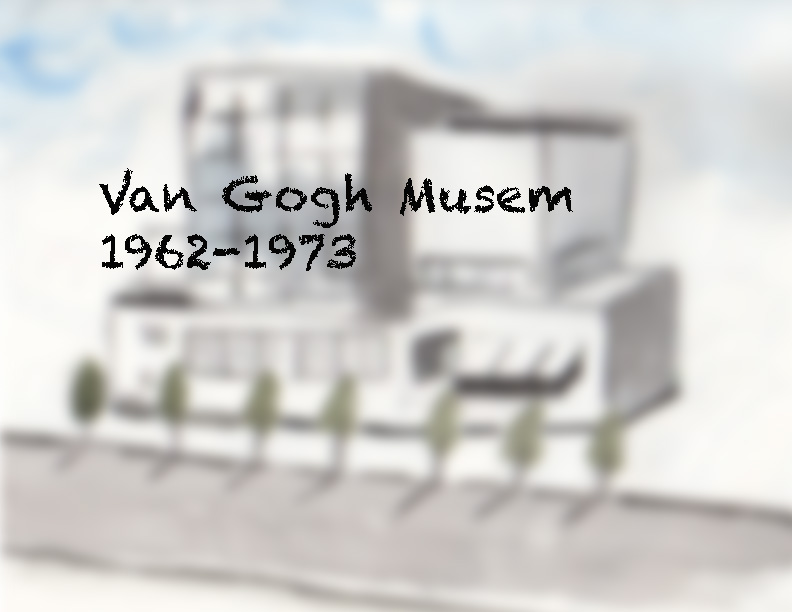 However he only completed the initial design before his death on 25 June 1964 (the day after his 76tth birthday) at the Rietveld Shroder House. The museum (1962-1973) was broadly executed in accordance with his plan. (The side elevations of this museum consist largely of glass, so the wall area available for hanging art is very limited.) 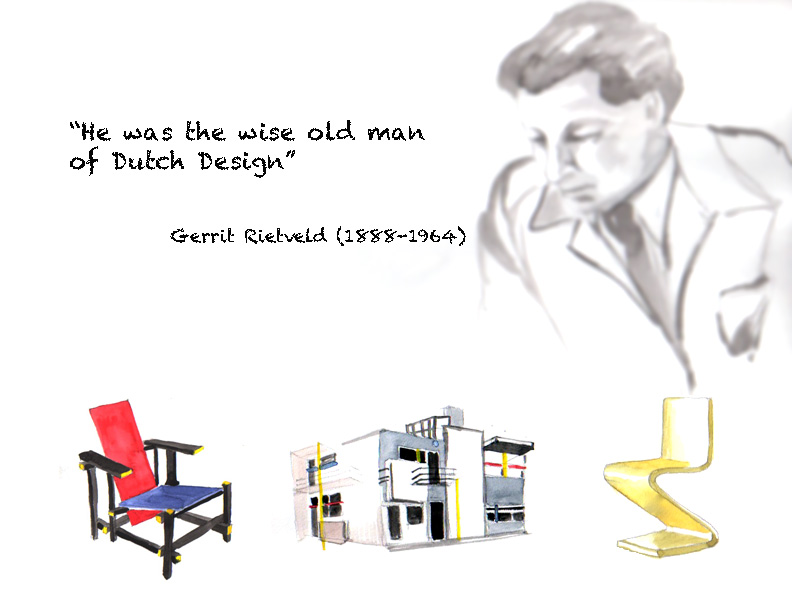 ‘He was the wise old man of Dutch design’.

For Rietveld, nothing was impossible. He was always experimental with new materials and techniques. Among his numerous furniture models and architecture commissions, The Red and Blue Chair, the Shroder House and the ZigZag chair remain as eternal design icons.

* PechaKucha 20×20 is a simple presentation format where you show 20 images, each for 20 seconds. The images advance automatically and you talk along to the images.

* I was introduced to PechaKucha 20*20 by Matthew Bird, my teacher of History of Industrial Design at RISD. Here is his introduction video of PechaKucha